Brown trout in New Zealand: Where they are, what they eat, when they spawn and how to target them.

Brown trout are resident in most lakes and rivers in New Zealand south of Auckland. There are fewer Browns in the North island due to water temperatures in the winter. Browns require slightly colder water temperature for their eggs to develop than Rainbows. Both varieties spawn in autumn and early winter IE: April – July. The North island does have a healthy population of Browns but they are more prevalent in the south. Both species grow to impressive sizes in NZ.

Brown trout do not make extensive migrations like Salmon do but, some Brown trout do spend time in the ocean. The main movement is from Lakes and the lower reaches of rivers to the headwaters of rivers and streams.

Brown and Rainbow trout feed mainly on aquatic insects, small fish and opportunistic items such as mice that end up in the water. In flowing water, the trout tend to face upstream and feed on insects and insect larva drifting downstream with the current. The most popular (and most successful) method of fly-fishing in New Zealand is nymphing. Using a floating line and imitation insect larva that drifts downstream is very effective. Matching the imitation larva with what is present in the location being fished is important but there are a few generic offerings that work well in most locations such as; Hare and Copper and Pheasant-tail flies (assuming the size and weight is correct). Getting the fly to drift at the same depth as where the fish are lying is very important.

In pools and slow flowing water trout tend to cruise the pool looking for food. Nymphing can be successful in pools but this requires much more technical skill. Presenting the fly softly and drifting it without drag is critical. In the summer when there is a hatch of insects, dry fly imitations are often used. Again, matching the imitation with what is available naturally, is important and so is minimising drag. Generic patterns that work well are; Parachute Adams and Royal Wuff. 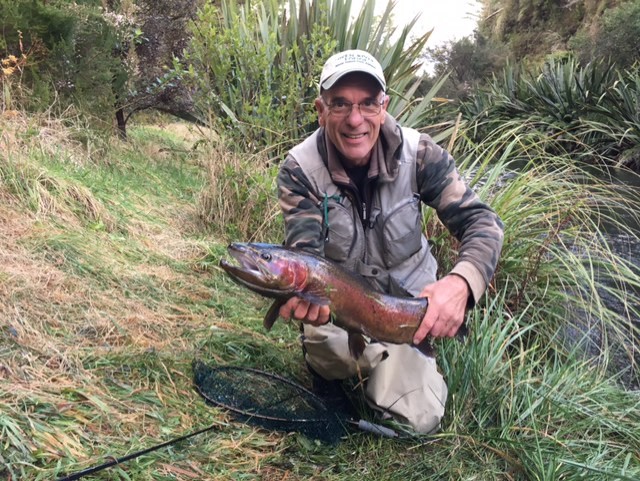 During the spawning season when trout are moving upstream or have reached their spawning ground there can be some very large trout congregating in large numbers. There is a window of opportunity when the fishing season is still open and, the trout are starting to spawn. This is especially true in the North Island where you can fish until the end of June. During the spawn; nymphing with roe imitations such as Glow-bugs and gel-eggs can produce excellent results.

Spinning is another option. Small bladed spinners with silver and red colouring can work well with Rainbows. With Brown trout, a Rapala lure imitating a Brown trout fingerling is more likely to produce results.

Wet fly fishing with red flies can be work in locations suitable to swinging a wet fly through the water while remaining concealed.

Regardless of the method you choose, stealth is critical. You need to stay unseen and that even includes the shadow of your rod tip. You can get away with a bit of carelessness with Rainbows but any lack of stealth when targeting Browns will make for a long and unsuccessful day.

To plan a DIY fishing trip to New Zealand and get all the local knowledge check out our self-drive itineraries below.